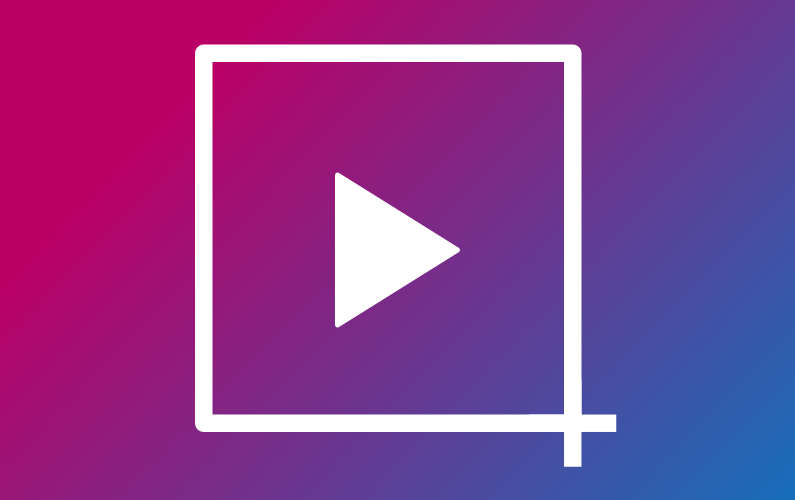 Voila allows you to capture anything on your desktop, from your iSight camera or a web page in whole or in part. The snaps can be annotated, edited and enhanced in Voila which has lots of options and shared via the inbuilt Flickr and FTP support.

Our full review is below. Thanks to the kind folks over at Global Delight here’s your chance to win a copy of the software.

Simply download the trial version of Voila, test it out and using the Comments Form below, tell us what feature you find most useful and what you’d use it for. Closing date is Saturday 15th August.

I’ve been taking screen shots of my computer display since I was at the cutting edge of technology with my Sinclair Spectrum in the eighties and I’ve never stopped the search for the perfect screen capture solution. As a technical writer I have an almost constant need to document my screen for inclusion in published materials of all kinds.

In my Windows days I used HyperSnap from Hyperionics and it coped pretty well with my demands, there were of course alternatives but HyperSnap had my heart and mind. Moving to a Mac meant my screen capturing affections were up for grabs and since my switch I’ve tried so many different screen capturing utilities that I’ve long since lost count of exactly how many!

The screen capturing application genre has developed considerably in recent years and each round of improvements makes my job less arduous. Hence me welcoming new applications in the space.

Voilà is a feature rich screen capturing application from GlobalDelight.com. In fact it’s feature set is so extensive I’ve separated out it’s functionality into four categories for the purposes of this review.

So I’ll be looking at Voilà’s considerable abilities in relation to:

Obviously the most basic requirement of a screen capture utility is it’s ability to capture your screen, in whole or in part. However, some applications fair better in this regard than others and Voilà absolutely excels.

Although this is somewhat configurable via the shortcuts section in the application preferences.

In addition to the usual screen capture options of full screen, area and windows Voilà add the ability to capture Windows hidden behind other windows via it’s object capture. Voilà also has the ability to capture selections, not just the standard rectangular selections but circles, polygons and freehand selections too. That alone is impressive but what enhances these capture alternatives are the extra options that become available once the initial selection has been made. Making that initial selection places an opaque overlay over the screen and activates several additional options including the ability to rotate the area, add an additional area to the capture and/or initiate a timed capture prior to executing the capture.

Inherent within the overlay is also the ability to resize and/or move the area to be captured prior to the capture. All of which makes it far easier to get the right capture on your first try than, for example, the options built in to OS X.

Voilà also captures full screen video and games. While QuickTime and the DVD player don’t play nicely, resizing before allowing the capture, VLC and even the EyeTV software do allowing huge screenshots to be captured easily.

Impressive but there’s even more options. One of my specific requirements for the creation of technical materials is to capture menus and this usually involves a convoluted process of setting up the view I need, capturing the whole screen or at a minimum an area covering the open menu and then carefully editing to remove the distractions in the background. Voilà has built-in menu capturing capabilities. While simple, it’s a rather unintuitive process as two distinct steps are required but it works perfectly. The trick is using the shortcut required once you’ve elected to capture a menu and the Voilà interface vanishes, giving you nothing in the way of guidance as to how to proceed. You need to use the keyboard shortcut combination of shift and command and M which will then actually capture the displayed menu.

That would be admirable enough but if the menu I want captured is actually a submenu then the Voilà capture engine actually captures both the first level menu and the submenu a feature which saves even more time and provides the ability to display the menu in context.

Talking of context Voilà also captures any context sensitive menus accessed via a right click or control and click.

So Voilà more than handles the usual capture requirements but it doesn’t stop there, it’s web capture capabilities are exhaustive.

Voilà not only captures the currently displayed page in Safari but it also includes it’s own browser for a much more refined level of capture. While it’s built-in browser can capture whole pages Voilà’s power comes from it’s ability to capture discrete areas of a web page using the page’s structure without the need to manually make complicated selections. In fact, uniquely multiple discrete areas can be captured in a single pass creating a superb workflow for the busy professional.

One of my favourite features of the web capture is the ability to display a page in the Voilà browser and be able to capture an area beyond the size of the browser window by scrolling. Previously I’d have had to capture the entire page and crop it to my precise requirements.

The final capture option is provided by the integration with iSight cameras for hours of fun completely unrelated to anything resembling work!

Of course capturing the desired image is only the start of a workflow. I remember all too well having folders full of captures for manuals, technical reports and whitepapers that all needed organizing before I could use them in the desired publication. Assigning meaningful names seemed to take an age and in the days before QuickLook even ascertaining what each capture was of meant opening the files one by one.

This is where Voilà’s organizer comes into it’s own. Sporting either an integrated view of a single image on the workbench with a capture tray displaying at the bottom or a full pane of thumbnails you can not only assign meaningful file names but also add tags, a full description and categorize them.

Taking the organization capabilities even further are Collections. Both manually created collections where the user can add any captures to a collection and Smart Collections which group images based on user defined criteria. Eight of these Smart Collections are available out of the box and provide neat classifications for locating recent captures, screensnaps, websnaps, camera snaps, imports, images dragged out of Voilà, images exported to Flickr and images exported to FTP. 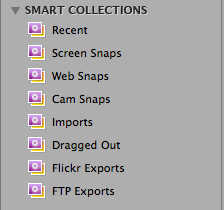 The “Shared By” section provides the ability to track how images have been shared so an image will become marked as Dragged Out, Flickr and/or FTP.

So you’ve captured your screenshots and you’ve organized them then the next logical requirement is to be able to edit them in various ways and Voilà has a comprehensive range of editing and annotation options.

Voilà has 10 completely configurable image editing tools which together provide an almost exhaustive range of options. The ability to add text, shapes, callouts and lines is all controlled from the Tools section. A couple more options available within the tools worthy of specific mention are stamps and blur. 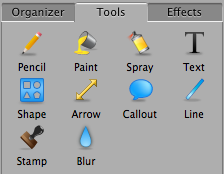 The Stamp tool allows a variety of different graphic elements to be added to the currently selected capture. I’d love the ability to add to the already comprehensive list of stamps so I could “stamp” a mouse pointer in a specific location on the capture.

The Blur tool as the name implies allows a selected part of the capture to be blurred to hide sensitive information. Where Voilà differs from other image capture tools is in the almost infinite range of options each tool has. For example the Blur tools provides gaussian blur, motion blur and pixelation alternatives. Each of these alternatives is completely configurable in its own right.

In addition to the Tools Voilà includes a collection of Effects. Whereas all the edits and changes made via the tools remain editable across editing sessions, hence are non-destructive, the Effects are destructive in nature and after applying an Effect the image needs to be flattened to save the Effect.

The Effects provided include the ability to crop the capture, apply stylized edges, skew the image, apply a filter and adjust the exposure, contrast, saturation, hue, sharpness and noise. A sweeping range of options for sure!

One of the unique features of Voilà is the Image Annotation feature. This allows one image to be “pinned” to the workbench and other images to be added to the first in a collage effect. I found this very useful for adding a mouse pointer to captures as there doesn’t appear to be an option to capture the mouse pointer during the snapping process.

Having captured, organized and edited your captures the final step is to get the captures to their final destinations be this a document, a web site, a sharing service an e-mail or printed out.

While Voilà has no proprietary associated sharing service it does have exporting to iPhoto, Flickr and FTP built in. Also provided is the ability to transfer an image to a new e-mail with a single click. Disconcertingly the e-mail option removed my signature from the e-mail but I was able to reselect the signature so a minor annoyance rather than a show stopper.

As someone with numerous web sites and online services I would have welcomed the ability to create multiple FTP accounts but at present the interface limit is a single account. Hopefully this will be addressed in future updates.

Should none of the export/sharing options meet your precise needs extracting your captures is a simple matter of dragging and dropping the capture to the required location.

While the built-in and free screen capture options may at least be adequate for the most basic needs the Mac has always represented the platform of choice for creatives and together with the increasing number of business professionals demanding more powerful features Voilà is capable of fitting their needs perfectly.

Of course by downloading the 30 day trial and posting your views below you get the chance to win a copy of Voilà for FREE!

You’ll be pleased to know that the trial isn’t one of those that takes it upon itself to remind you it’s a trial every 30 seconds either so you’ve nothing to lose by giving it a go.

Enjoy it and good luck in the competition.

Elaine Giles is an acclaimed and experienced IT trainer, creative designer, technology consultant and podcaster. She specialises in slide design, visual communications and has extensive expertise in virtual training including webinar creation and delivery. As well as a founder and producer of MacBites, she's a highly-regarded commentator on Apple issues and is in constant demand as a guest on a number of Apple-related podcasts.