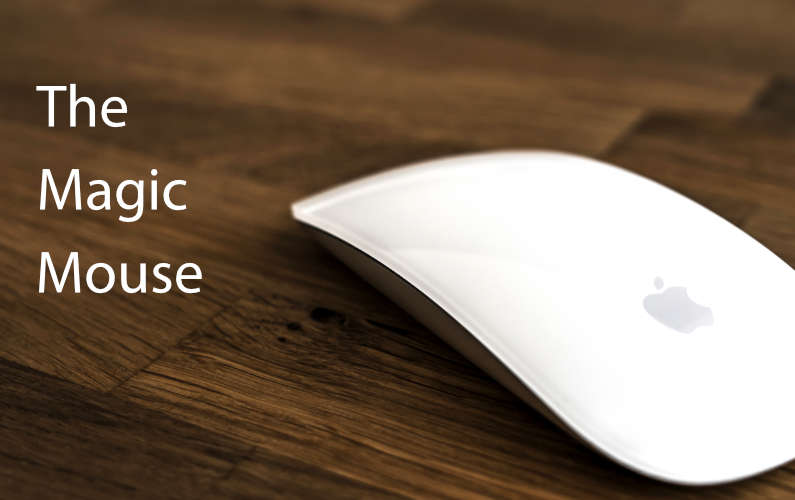 I bought my iMac in February 2009 when my PC decided it had had enough of the competition from Apple (I was also running a Mac Mini side by side with my PC). When I bought the iMac I was tempted to buy it with the wireless keyboard, but I decided that the battery life might not be that great, plus the wired keyboard had a keypad.

2009 rolls on and we are nearing Autumn (the fall as it is known on the other side of the pond), Apple release the Magic Mouse, a wireless mouse with just a curved clear white plastic surface for touch sensitive finger gestures.

It’s a work of art let alone a functional mouse to attach to your Mac. By this time my Mighty Mouse’s scroll ball had been playing up, i.e. refusing to work, I had already fixed it a few times by rolling the upper-side on a soft surface, which fixed it for a few weeks, anyway; I was getting annoyed with the Mighty Mouse, so the arrival of this beautiful Magic Mouse was my savior.

Reading more and more reviews of the Magic Mouse had also confirmed in my mind that I needed one, when I say needed one that is geek-speak for “I want one”. Anyway, I needed someone I could trust to confirm what in my mind was a must have product, so does Elaine of MacBites fame go along to her nearest Apple store and play with this device, no she doesn’t, so I just had to go along and try it myself. By now it’s December and we are getting into Christmas present buying mode, which as always I hate, I hate shopping at the best of times, but visiting shops full of Christmas shoppers to me is a nightmare. Anyway, Mrs Andy knows that I like all things from the Apple stable, so it is agreed we will go shopping in Kingston (upon Thames, not Jamaica), and we can visit the Apple store so that I can try out the Magic Mouse, and if the creature is loveable she would buy it for my Christmas pressie. We arrive at the Apple store, which as usual is very busy full of the kids who are there just to play, but I manage to get myself onto an iMac with said Magic Mouse connected, I play with the mouse testing it with as many finger gestures for scrolling etc, that I can think of, until such time that Mrs Andy, who by now must have been getting bored, and asks; well do I like it or not.

I answer, yep it’s great much much better than the Mighty Mouse, I’ll have one. Then we find out from a staff member that they had sold out of Magic Mice, and I would be better ordering one from the Apple online store. Mrs Andy was quickly despatched to purchase a wireless keyboard, which was to become my Christmas pressie for this year. On arrival back at home, I duly placed an order for the Magic Mouse. Two weeks later, approx, it arrived, I unpacked it and followed the setup instructions, and I was in business the Mighty Mouse had at last been replaced by the Magic Mouse a far superior rodent for your Mac.

To use the Magic Mouse, once connected to your Mac, is simplicity itself. For me the main problem I have with mice, mainly on my work PC in the office, is that the wire keeps getting trapped on something on or behind the desk and movement of the mouse as a result is hindered. Being a wireless mouse is great it just can’t get hindered by it’s trailing wire, it doesn’t have one. Together with my wireless keyboard, I now have a wireless desk which I much prefer, even just for the aesthetic beauty. The Magic Mouse is much lower than conventional mice, and this means your fingers are flatter, and I find I don’t get any finger strain using it which I do get from conventional mice. Scrolling window content is much more intuitive with the swipe of your fingers up and down the clear touch sensitive surface and feels much smoother than a conventional mouse especially the Mighty Mouse with it’s awful scroll-ball, which as mentioned earlier, has a tendency to get stuck. There are no noticeable buttons on the Magic Mouse as the surface is just one piece of clear white plastic, however the whole surface acts as a button which when pressed has a very positive click feedback, the Mac interprets the button-down and button-up events just the same as for other mice. The Magic Mouse, through (System Preferences | Mouse) can be setup for a secondary click, which I can’t do without. Because the whole surface of the Magic Mouse is touch sensitive, clicking the right hand side of the mouse will give rise to a secondary click event, once secondary clicking has been enabled.

Before I had started to use the wireless keyboard and mouse, and the reason why I didn’t get a wireless keyboard when I bought my iMac, was because I thought that the battery life of each device would not be that great. However, as I write this review it is the end of January 2010, and the battery indicators in Snow Leopard show the battery levels are 81% and 83% for the keyboard and mouse respectively, which considering that I use my iMac most evenings and weekends, is very good in my opinion. According to Apple from it’s two AA batteries you should expect up to four months use for the Magic Mouse.

I would highly recommend the Magic Mouse, and if you haven’t yet tried one out, Elaine, then strongly suggest that you do so in the not too distant future. Now when are those lovely iPads due for release?